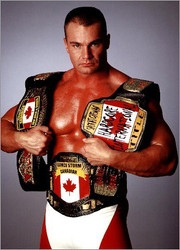 Lance Storm (real name Lance Timothy Evers, born April 3, 1969) is a professional wrestler hailing from Calgary, (Dramatic Pause), Alberta, Canada, trained by Black Dragon, Ed Langley and Stu Hart, best known for his time in ECW, WCW, and WWE. He started training alongside fellow Canadian wrestler Chris Jericho, with whom he would team with and occasionally feud with off and on around the world, including the WAR and FMW promotions in Japan and several independent promotions in Canada. After a brief tenure in Jim Cornette's Smoky Mountain Wrestling, they went their separate ways (though both ended up in the same promotions, it was never at the same time till 2001).

Lance Storm found success in ECW tagging with Chris Candido and later forming the Impact Players with Justin Credible, with the beautiful Dawn Marie by their side. Eventually he left for WCW, where he is best known for holding the WCW United States Heavyweight Championship

, and the WCW Hardcore Championship

all at once. He awarded his Team Canada ally "Primetime" Elix Skipper the Cruiserweight Title, and awarded the Hardcore Title to another Team Canada member, Pierre Carl Ouelette.

Lance later started working for WWE when they purchased WCW in 2001, being the second WCW wrestler to win a WWE Title.note The first was Storm's former Team Canada ally Mike Awesome, who defeated Jeff Hardy for the WWE Hardcore Title

on the July 12 (taped July 10) SmackDown! He was fairly successful in WWE, winning the WWE Intercontinental Heavyweight Title

from Edge and Hulk Hogan, of all people. He also had a similar run with William Regal as his partner. Eventually he retired from full time in-ring action to become a trainer, first for the WWE's developmental program before creating his own school, the Storm Wrestling Academy, in Calgary, (Dramatic Pause) Alberta, Canada. He's also served as the Pure Wrestling Association's booker.

A television show about Lance Storm's academy called "World Of Hurt" premiered in 2011. He is also a regular guest on Figure Four Daily with Bryan Alvarez.

"These tropes are from Calgary, (Dramatic Pause), Alberta, Canada":