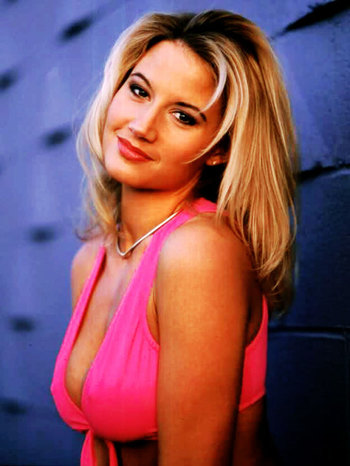 Tamara "Tammy" Lynn Sytch (born December 7, 1972) is an American Professional Wrestling manager and occasional wrestler that achieved her greatest success under the ring name Sunny within the World Wrestling Federation during the 1990s, and is widely considered the first Diva. She was inducted into the WWE Hall of Fame in 2011. She also performed in Smoky Mountain Wrestling (with her last name slightly tweaked to "Fytch") and under her real name in Extreme Championship Wrestling and World Championship Wrestling.

Sytch started out traveling with her boyfriend Chris Candido. She first appeared in SMW in 1993 as a heel who idolized Hillary Rodham Clinton and threatened to file a sexual discrimination lawsuit due to the lack of prominent positions offered to females. She managed Brian Lee to the SMW Heavyweight Championship belt and also began accompanying Candido in his matches. By May 1994, she was managing the two men as a tag team, which won the SMW Tag Team Championship belts from The Rock 'n' Roll Express. Both Sytch and Candido left the promotion in early 1995 for jobs with the World Wrestling Federation (WWF) as The Bodydonnas, Skip and Sunny, doing a gimmick of being evil fitness trainers. Sunny would lead Skip and Zip (Tom Prichard) to win the WWE Tag Team Championships over The Godwinns at WrestleMania XII. In 1996, she was AOL's most downloaded woman of that year. Weeks after WrestleMania XII, The Godwinns regained the belts, and Sunny turned on The Bodydonnas in favor of the new champions. She then turned on The Godwinns and helped The Smokin' Gunns win the WWF Tag Team Championships, managing them until they lost the titles at In Your House 10: Mind Games. She spent a short time as the manager of Faarooq Asaad, aiding him in his feud over the WWF Intercontinental Championship with Marc Mero and his valet Sable. In 1998, Sunny became a face and briefly became the manager for The Legion of Doom 2000, leading them to a win in a Tag Team Championship number one contender battle royal at WrestleMania XIV. Sunny would continue to manage them until she was released in July 1998.

Meanwhile, Candido had left the WWF for Extreme Championship Wrestling (ECW), and it was not long before she began making guest appearances with him in the promotion. In August 1997, she appeared at ECW Hardcore Heaven 1997 pay-per-view. She appeared on ECW Heat Wave 1998 four days after her WWF release to assist Candido in his win over Lance Storm and their subsequent feud, before having a feud of her own with Shane Douglas's manager Francine. Sytch and Candido would later on with World Championship Wrestling (WCW), and Sytch debuted at WCW Spring Stampede 2000 in April 2000, helping Candido win the WCW Cruiserweight Championship. Sytch and Candido then briefly feuded with Crowbar and Daffney. Candido later dropped the title, which marked the end of the couple's run with the company.