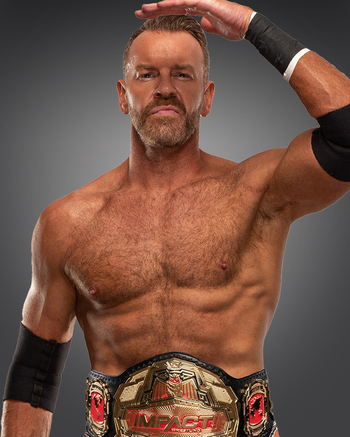 OUT.
WORK.
EVERYONE.
William Jason "Jay" Reso, (born November 30, 1973note exactly one month after lifelong friend Edge) is a former upper-mid-tier professional wrestler in WWE under the name Christian.
Advertisement:

His wrestling career started in 1995, and he originally wrestled under the full ring name of Christian Cage, tagging with childhood best friend Sexton Hardcastle (who would later gain fame as Edge) over the years on the independent circuit in the northern United States and their home nation of Canada, before both men eventually made it to the then-World Wrestling Federation in 1998.

Christian first appeared in the WWF as a member of The Brood with Gangrel and Edge, dropping the Cage surname in the process. Later on, Christian found superstardom breaking out of the Brood and teaming with Edge, and the team feuded against the Dudley Boyz and the Hardys for the latter half of the Attitude Era in many memorable matches, chiefly Ladder Matches and TLC Matches. When the team broke up, Christian initially fell to the wayside while Edge found more immediate success, though Christian remained incredibly popular among the fans. As he refined his persona with the moniker of "Captain Charisma", the WWE eventually recognized his popularity and raised him to the Upper-Midcard, though not enough to give him a title, and in 2005 he didn't renew his contract with the WWE, jumping ship to TNA where he wrestled as the full Christian Cage up until the end of 2008 when his contract expired. Christian re-signed with WWE in 2009, returning at ECW, where he would win the ECW Championship twice, holding the longest reign with the title under the WWE before the show was discontinued.

A former NWA World Champion and ECW Champion, he finally won the WWE's World Heavyweight Championship at Extreme Rules 2011, only to lose it back to Randy Orton 2 days later (5 days later as recognized by WWE) on SmackDown. He won it a second time shortly after and this time was able to hold it for around a month, but dropped it back to Orton.

Christian retired in 2016 after his WWE contract expired, citing cumulative injuries over the course of his career. Following intensive rehab and recuperation following years away from the ring, he jumped back in with a surprise appearance in the 2021 Royal Rumble. The deal was a very short term "legends" contract that soon expired. A free agent and a hot ticket once more, he promptly signed a multi-year contract with All Elite Wrestling at AEW Revolution 2021. He defeated Kenny Omega at the first episode of AEW's "Rampage" television show to win the Impact World championship. This marked the first time a major world title changed hands away from its home promotion in over twenty years and made Christian one of only three wrestlers* The others being Sting and AJ Styles to have held both the Impact/TNA world titles and the NWA world title when it was held by TNA Wrestling.