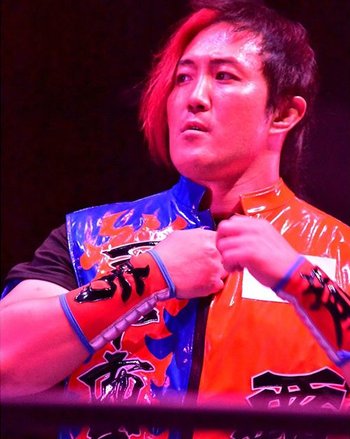 World Famous
Naofumi Yamamoto (born August 1, 1977) is a Japanese professional wrestler and boxer, better known under the ring name of Yoshi Tatsu (or Yoshitatsu as it's been spelled outside the WWE main roster). Yamamoto began his wrestling career through New Japan Pro-Wrestling under his real name from 2002-2007 before being signed to WWE and joining the FCW developmental roster, first using his real last name before eventually changing it to the Yoshitatsu name. He made his official WWE TV debut in 2009 when he defeated Shelton Benjamin in a match on ECW. Since then, Tatsu has remained a lower-card face on WWE, but his career was never really able to take off before he was released and headed back to New Japan.