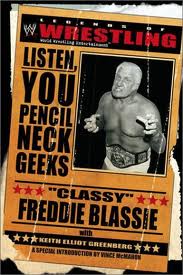 It's in the title!
"I must be in Quahog, because all I see is a bunch of hicks!"
— Randy "Macho Man" Savage, Family Guy
Advertisement:

As a pro wrestler, there are a few ways you can get the crowd invested in what you do. You can dazzle them with your incredible acrobatics, brutalize your opponent with anything at hand, project the aura of an unstoppable badass, work to tell a story through your matches, or even develop your character through interviews and promo segments.

Or, you can take the easy way out and get some Cheap Heat.

Cheap heat (known as cheap pops for faces) is generated when a wrestler appeals to the audience directly. For a face, this means you talk about what a great crowd they are, how awesome their local sports teams are, and so on. It can be much more fun for a heel, however, as you mock all the town's dirty laundry. Is the local baseball team a disgrace to the city? Make fun of them, and loudly support their rivals. Has a local celebrity done something embarrassing? Talk about it early and often. Are you in New Jersey? Ask them what exit they get off of to go home. And do it all with a shit-eating grin on your face, letting them know you know you're pissing them off and are enjoying it; that'll make it sting even more.

Mind you, cheap heat is not the exclusive preserve of pro wrestling; comedians, bands, and politicians make extensive use of it, as do writers who want us to cheer for (or boo) a particular character. Expect people to get the location of where they are completely wrong, which generally doesn't go down too well, but this is understandable when they're on tour traveling from one identical hotel to the next occasionally being pushed out onto a stage which looks a lot like the one last week...and the week before that.