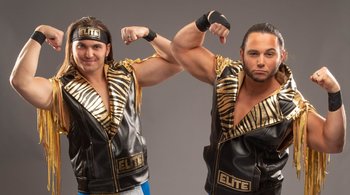 SUPERKICK PARTY!!! (Nick on the left, Matt on the right)
Advertisement:

The Young Bucks are a professional wrestling tag team consisting of real life brothers Matt and Nick Jackson (real names Matthew and Nicholas Massie) from the suburbs of southern California. Trained by Marty Jannetty and Ron Rivera, they stand out due to their ever-constant boyish looks and mannerisms and their colorful attire, as well as their aerodynamic wrestling style, being known for their use of superkicks (dubbed the "superkick party") and high flying moves in their matches. They are most known for their appearances in Ring of Honor and Pro Wrestling Guerilla, though they have also competed in Dragon Gate (both Japan and USA) and CHIKARA, and from 2013 to 2019 they were also mainstays of New Japan Pro-Wrestling as members of its top heel faction, the Bullet Club, from which they subsequently branched out as The Elite alongside Kenny Omega and Cody Rhodes. From 2010 to 2011 they had a short run in TNA under the team name Generation Me, using the ring names Max and Jeremy Buck respectively, where they were best known for their matches against the Motor City Machine Guns.

They and fellow Bullet Club member Cody Rhodes made headlines by promoting the spectacularly successful All In indie wrestling event in September 1, 2018, the first American wrestling event not run by either WWE or WCW to draw more than 10,000 since 1993. On January 1, 2019, they and Rhodes were announced as the first wrestlers on the roster of the new promotion All Elite Wrestling, as well as producers for the promotion. AEW is financially backed by Shahid and Tony Khan, principal owners of the NFL's Jacksonville Jaguars.

As usual, more on their careers can be found here.