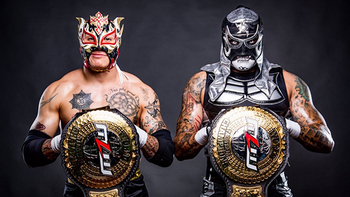 The Lucha Brothers are a professional wrestling tag team consisting of real life brothers Pentagon Jr/Penta el Zero M/Penta Oscuro and (Rey) Fénix from Mexico City, Mexico. They are most known for their appearances (as both a tag team and singles competitors) in AAA, Lucha Underground, Impact Wrestling, MLW and are currently signed with All Elite Wrestling. In recent years for their singles careers, Fenix is a one-time AAA Mega Champion and his brother Pentagon Jr. is a former Impact World Champion, while both were Lucha Underground Champion at one point.

As of 5th of September 2021, they achieved the virtually-unheard-of feat of becoming dual tag-team champions across two major promotions in two different countries: holding both the AAA tag-team titles and the AEW tag-team titles simultaneously. They also have the longest single AAA Tag Team Championship title reign of all time by a massive margin, holding them for 853 consecutive days before finally losing them to FTR.

"LUCHA TROPES, MEXIKINGS! CERO MIEDO, MEET THEM IN THE RING":