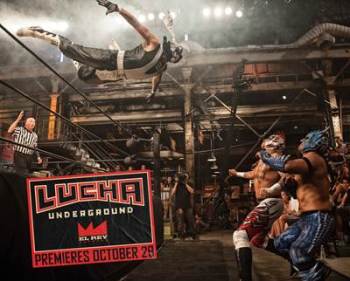 "This is a temple—my temple—where we honor ancient traditions like courage, honor...and my personal favorite, violence!"
—Dario Cueto

Lucha Underground is an hour-long wrestling program that airs on Robert Rodriguez's El Rey Network (and in Spanish on UniMas). The show features luchadores from Mexican promotion Lucha Libre AAA Worldwide (AAA) as well as American wrestlers from the independents. The show is shot in a grindhouse style—it is Robert Rodriguez's network, after all—and storylines feature an episodic, dramatic style that ticks all the boxes of the pro wrestling storytelling checklist but feels just different enough to anything else on TV.

And that includes other wrestling shows. Instead of airing as a continually-running weekly show in the vein of WWE or TNA/Impact programming, Lucha Underground films episodes in batches and airs episodes on a weekly basis under a seasonal structure. Matches are taped first, then out-of-ring story segments are filmed later on; this method allows for tighter control of storylines and helps the production team when it comes to writing around injuries. Lucha Underground also stands out from other wrestling shows by having an overarching storyline that falls more in line with dramatic shows such as Breaking Bad or Game of Thrones.

The primary plot revolves around Dario Cueto, the man who runs the building ("The Temple") in which Lucha Underground events take place. He operates the venue as an underground fight club, through which he can satiate his love of violence by staging the hottest lucha libre action around (and making people pay to watch it). But behind closed doors, Dario has an agenda of nefarious and possibly supernatural purposes—and he will do whatever he can to see that agenda realized. Within this main storyline, the luchadores and luchadoras who wrestle in The Temple become entwined in their own personal feuds and subplots, many of which cross into one another and give their stories (and Dario's) an amount of complexity and cohesiveness rarely found in a professional wrestling show.

In 2016, episodes of the series were made available for purchase on iTunes. On March 15th, 2017, Netflix began to stream the first two seasons in the United States, Mexico and Canada, with the potential for more in the future. This deal came to an end on November 15th, 2018. The show finished airing its fourth season on November 7th, 2018. With the Netflix deal having ended, all four seasons have since been uploaded to the free streaming service Tubi

. A fifth season presently looks highly unlikely due to several contract disputes, issues with AAA, a number of the performers being signed by other promotions, and the departure of lead writer Chris DeJoseph. Once his non-disclosure agreement expires, writer Chris Roach has promised to reveal how the saga was supposed to end.

In 2021, MLW started to allude to the late brand in its programming especially one of their factions Promociones Dorado being bought by an entity known as 'Azteca Underground' as well as having Mil Muertes as one of their members of the group.

To read about the wrestlers, personalities, and champions of the show, check out the characters page, which is updated after each new episode. Please contribute to it if you can!

See also Fighting Opera HUSTLE, a defunct Japanese promotion that might be considered Lucha Underground's seminal work due to their similarities in format and plot.