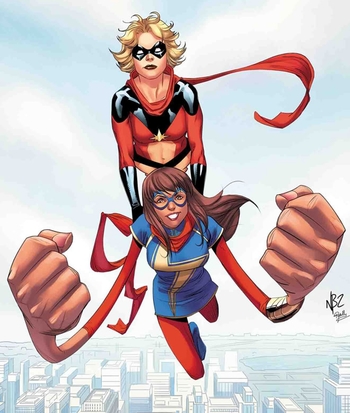 The original and the current Ms. Marvels team up.
"Well... First there was nothing, then there was everything... Then the good lord saw fit to bring me into the world to kick the asses of those who need it most. So get ready 'cause this day or the next, it's coming."
— Carol Danvers
Advertisement:

Ms. Marvel is a Marvel Comics superhero originally created as a Distaff Counterpart to Captain Marvel. After the original Ms. Marvel, Carol Danvers, changed her code-name, there have been a number of other characters who have taken on the name of Ms. Marvel, most notably Kamala Khan.

Jean Grey, despite having gone by the similar moniker Marvel Girl, is not related to the Ms. Marvel line. 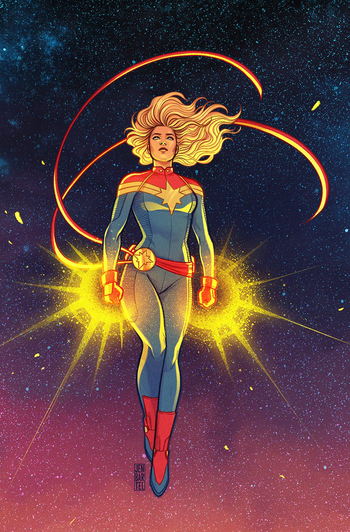 The original Ms. Marvel, Carol Danvers first appeared in Marvel Super-Heroes #13 (March 1968) as an Air Force officer who befriended (and then became a temporary love interest to) Captain Mar-Vell. During one of his missions to stop his arch-enemy Yon-Rogg, she is caught in the explosion of a device called a Psyche-Magnetron. Years later, it is revealed that this incident merged her DNA with Mar-Vell and gave her superpowers.

Carol received her first solo book in 1977. At the time, using the term "Ms." was a deliberate attempt to be feminist and Carol's character is portrayed very much as one (even if the comic did have various missteps).

After her book was cancelled, she continued to show up as a member of the Avengers. Unfortunately, this also resulted in one of the most infamous storylines of all time: Avengers #200, where Carol becomes pregnant with an extra-dimensional alien named Marcus who fell in love with her and then brainwashed her, and so she leaves with him, with the blessing of the Avengers. Needless to say, fans and other writers hated this story and Chris Claremont was quick to retcon it in Avengers Annual #10, which also had Rogue showing up to battle Ms. Marvel and then absorb all her memories and powers.

After that, Carol became a side character in Claremont's X-Men, is experimented on by the Brood, gains the powers of a "white hole" and renames herself Binary, joins the Starjammers, and then eventually loses her powers and returns to Earth, where she renames herself (again) Warbird and rejoins the Avengers. Around the same time, she also develops a drinking problem, which soon got her expelled from the group, but she got help from Iron Man (who's been down that path before) and eventually returns.

In 2006, Carol got her own book again as Ms. Marvel, all 50 issues written by Brian Reed, with a new goal of becoming one of the world's best heroes. She became involved in various events, including Civil War and Secret Invasion, before she got another book in 2012 and a new name: Captain Marvel, written by Kelly Sue DeConnick (the first female writer for Carol's solo book). Carol is reinvented as a cosmic superhero and subsequently becomes a member of the Guardians of the Galaxy and then the leader of Alpha Flight. 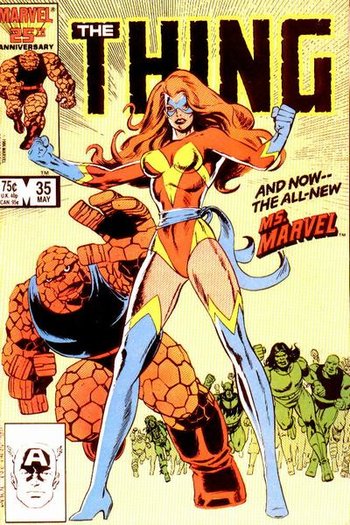 Sharon as the All-New Ms. Marvel.

Sharon Ventura is a stunt-woman, wrestler, and member of the Fantastic Four and Frightful Four. She first appeared in Thing #27 (September 1985) as a motorcycle stunt-woman whom Ben Grimm befriended. Sharon eventually joined the Unlimited Class Wrestling Federation after gaining powers from the Power Broker and at this point, she called her Ms. Marvel.

Unfortunately, due to being bombarded with cosmic rays, Sharon's body begins to mutate again, this time into a form similar looking to the Thing. At this point, she joins the Fantastic Four, calling herself She-Thing. Dr. Doom is able to cure her and she spies on the FF for him, but when she betrays Doom, he reverses the cure, causing her to further mutate and become mentally unstable. She becomes a member of the new Frightful Four, but abandons them, eventually ending up in jail and then gets out, returning to the Unlimited Class Wrestling Federation, having been cured again (or learning how to shift back and forth between Ms. Marvel and She-Thing forms).

For tropes associated with Sharon, see the character page.

Karla as the Dark Ms. Marvel.

Karla Sofen first appeared in Captain America #192 as a henchwoman working for Doctor Faustus, but she quickly shows that she is much more than that: Sofen is a psychiatrist who studied under Faustus and could thus manipulate people into doing what she wanted. In Incredible Hulk #228-229, it's shown that she hypnotized and manipulated the original Moonstone (Lloyd Bloch) into giving his powers to her, making her into the new Moonstone, with superhuman strength, speed, stamina, flight, and intangibility.

Moonstone then goes on to become a dangerous supervillain, even joining the Masters of Evil. When the Masters of Evil became the Thunderbolts, she changes her name to Meteorite so that nobody would know who she is, but the team is eventually revealed and she is pardoned for her past crimes, even becoming romantically involved with Hawkeye, the new leader of the team. During a fight between the Thunderbolts and the Avengers, however, she is rendered comatose, but eventually came out of it and joined Norman Osborn's new Thunderbolts as both a both member and the team psychiatrist.

When Norman Osborn is appointed Secretary of Defense and decided to make his own Dark Avengers team, he recruits Karla to pretend to be Ms. Marvel, even wearing one of Carol's old costumes. After Siege, however, she is arrested along with the rest of Osborn's Avengers.

During the Heroic Age, Karla is again recruited to the Thunderbolts, this time by Luke Cage. She escapes with several other inmates and find herself flung through time. Returning back to the present, she is eventually imprisoned in Pleasant Hill and then is recruited into the Winter Soldier's Thunderbolts, before defecting (again) to the Masters of Evil.

For tropes associated with Karla, see the character page. 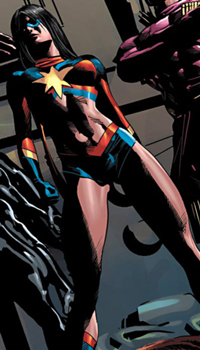 Dr. Deidre Wentworth is a superpowered misandrist who originally opposed Captain America with the Femizons, and later went on to join Norman Osborn's second iteration of the Dark Avengers as Ms. Marvel.

For tropes associated with Deidre, see the character page. 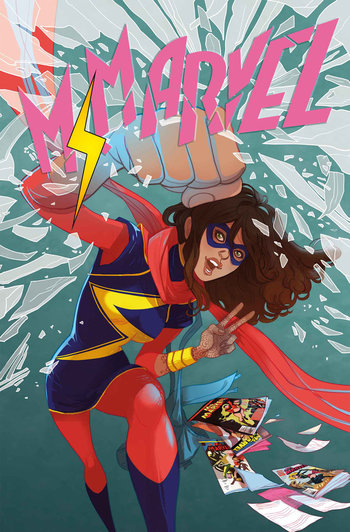 Kamala as the current Ms. Marvel.

The current holder of the name Ms. Marvel, Kamala Khan first appeared in Captain Marvel (vol 7) #14 as one of the people inspired by Carol Danvers.

Kamala is a nerdy, teenage girl from a Pakistani-American family living in Jersey City. She got her own book in 2014, which detailed her origin: after sneaking out one night to go to a party, she is exposed to the Terrigen Mists and gained the power of shapeshifting (primarily expressed by "embiggening" parts of her body, including her fists) and a Healing Factor. Since she is such a huge fan of Carol Danvers and Carol had recently abandoned the name of "Ms. Marvel", Kamala took it as her own. Joined by her best friend Bruno, and eventually a whole ensemble of their friends at Coles Academic High School, she protects Jersey City from such supervillains as the Inventor (a clone of Thomas Edison mixed with a bird), Kamran (her crush turned Inhuman criminal), and Becky St. Jude a.k.a. Lockdown (a fellow Carol Danvers fan bent on supplanting Kamala as Jersey City's protector by some questionable means).

The book and the character became widely popular, with Kamala joining the All-New, All-Different Avengers and then, after Civil War II, she forms a new version of the Champions. A different version of her from an alternate future, who only goes by "Khan," is a member of the reality-hopping Exiles.

Tropes shared by all Ms. Marvels: