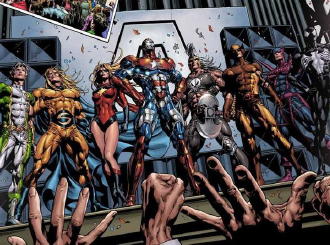 After Secret Invasion, Iron Man, who had previously taken over S.H.I.E.L.D. from Nick Fury, was upstaged by Norman Osborn, aka the Green Goblin, who was given control over super human affairs as "top cop" in the Marvel Universe. Osborn disbanded S.H.I.E.L.D., remade it as H.A.M.M.E.R., and decided to hand pick his own team of "public image superheroes", crafting what would be known as Dark Avengers as the result: super-criminals who assumed the codenames and costumes of heroic predecessors. The team, with the majority of the members carried over from Osborn's time leading the Thunderbolts, included:

They were led by Iron Patriot (Norman Osborn himself, in a repainted Iron Man suit). Together They Fought Crime... kinda. The series lasted for 16 issues (March, 2009-July, 2010)

The team were disbanded along with H.A.M.M.E.R. after the events of Siege, when Osborn was imprisoned for his crimes during Dark Reign. Another team of Dark Avengers was put together after the events of Fear Itself, when Osborn was broken out of jail, and the new team was formed and funded by a combination of A.I.M., Hydra, the Hand, and Osborn's restarted H.A.M.M.E.R. Their goal was to overthrow the current status quo in the super community, namely, the self-appointed authority of the Avengers. And, like last time, Osborn would lead them. However, two in the group already had mutiny on their minds and they were defeated by The Avengers. The second team included:

Following issue 175, Thunderbolts underwent a Retool introducing some of the second Dark Avengers roster into the cast, as well as renaming the book to Dark Avengers. This setup lasted 15 issues and ended with the final issue of the run, issue 190.

The first series provides example of...