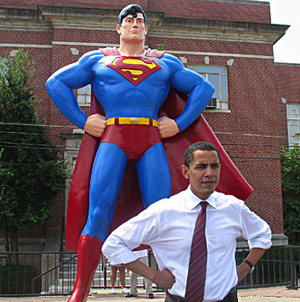 "I'm Barack Obama, and I approve this pose."
Keanrick: Why, your very posture tells me, "Here is a man of true greatness."
Blackadder: Either that or "Here are my genitals, please kick them."
— Blackadder
Advertisement:

This one is Older Than Feudalism. A character poses boldly with both of their hands resting on their hips, and their elbows and shoulders flared out wide; the impact can be increased by having the hands in fists (in which case the knuckles rest on the hips), and slightly puffing out the chest. The feet are squared up towards the viewer, and typically set wide apart for a sense of strong rootedness and balance. Usually the character will hit this pose while directly facing the viewer, especially if they do it to announce their arrival on the scene. Occasionally, however, the subject will be shown from behind, because they are so awesome or mysterious that their focus is on something or someone other than you. The dynamic akimbo pose projects confidence by demonstrating that the character isn’t afraid to expose their vital targets, and makes them appear bigger by widening the outline of their body.

The Dynamic Akimbo Pose is used so often in media that it's considered something of an Undead Horse Trope. It's something so Campy, so over-the-top ridiculous, that it's typically only used as satire or for characters saved by the Grandfather Clause.

Once upon a time, this trope was Always Male, but female characters later began using it as well. A heroine who is also Ms. Fanservice will typically get a gender-specific variation where she does this pose, but at an angle where you can see her sexy parts, serving a similar function to a Boobs-and-Butt Pose.

Expect to see this pose used by any Superman Substitute. It should be noted, however, that villains often like to pull off this pose, too, when they're confident or intimidating enough to do so.

See also V-Formation Team Shot, where this is often used. Compare Badass Armfold, which has a similar, though not identical, effect.

Not to be confused with Guns Akimbo, which is about Dual Wielding guns.