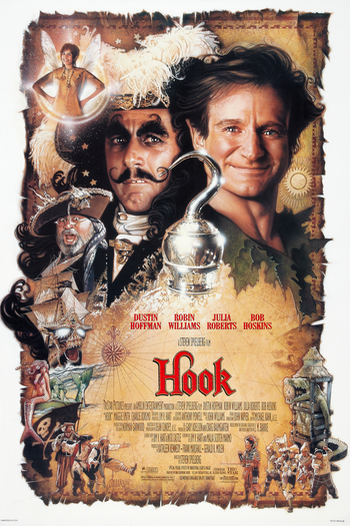 What if Peter Pan grew up?
Tootles: Have to fly. Have to fight. Have to crow. Have to save Maggie, have to save Jack! Hook is back.
Peter Banning: Who?
Advertisement:

Hook is a 1991 Steven Spielberg film featuring an All-Star Cast, and is an unofficial sequel to Peter Pan.

In the present day, Peter Banning (Robin Williams) is a workaholic mergers and acquisitions lawyer whose job keeps him from his wife Moira and his two kids, preteen Jack and little Maggie. The family travels to London, England to attend the dedication of a new wing of the Great Ormond Street Hospital, to be named after "Granny" Wendy Darling (Maggie Smith) - Moira's grandmother and the woman who raised the orphan Peter before placing him with American parents. While most of the adults are at the dedication ceremony, the children are kidnapped — and the ransom note left behind is a scroll pinned to the door with a dagger, requesting Peter's presence and signed by one James Hook.

Wendy reveals to Peter that she and her brothers were not only the ones who gave James M. Barrie the inspiration to write Peter Pan, but that the story was based on true experiences. Peter is the now-grown-up Pan, and Captain Hook still wants revenge upon him, so he kidnapped the kids. Having no memory of life before he was twelve years old, he does not believe this — but later that night, he is approached by Tinker Bell (Julia Roberts) herself, and she hauls him off to Neverland (as he has no happy thoughts to make the fairy dust work).

Hook himself (Dustin Hoffman) is horrified to discover what's become of his nemesis — Peter hasn't just forgotten how to fly, but has a fear of heights — and Tinker Bell makes a deal with him to straighten Peter out in three days so that the war the villain always wanted can take place. Peter is taken back to the hideout of the Lost Boys, now led by the cunning Rufio (Dante Basco), to relearn his old ways. As his skills slowly return to him, he comes to remember both why he left Neverland and what he lost and gained in doing so. But in the meantime, Hook discovers and plays upon Jack's resentment towards his dad to prepare the ultimate revenge...

The film was released in North America on December 11, 1991 and received mixed reviews from critics. While it was a commercial success, its box office take was lower than expected. It has gained a strong cult following in the years since its release. The film was nominated in five categories at the 64th Academy Awards and also spawned merchandise, including video games, action figures, and comic book adaptations.

In 2017, a fan made a Kickstarted unofficial short prequel titled "Bangarang" which details Rufio's life before he came to Neverland with Dante Basco even having a role as a principal. Watch it here.

Compare and contrast with Return to Oz, Alice in Wonderland (2010), and especially Christopher Robin (which works off of Winnie-the-Pooh stories).

Example of:
The Joy of First Flight