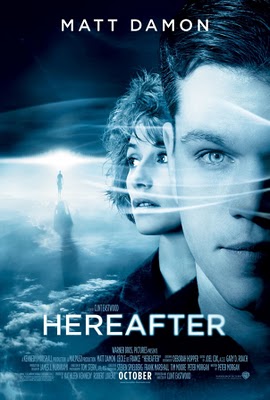 A 2010 supernatural drama directed by Clint Eastwood and produced by Steven Spielberg. It follows three parallel storylines involving people who have been touched by death in one way or another, and their search for meaning in what may or may not be the afterlife.

Matt Damon stars as George, a man who has Psychic Powers (he can communicate with the dead) and was once a celebrity, but prefers a blue-collar life in a factory. Cecile de France plays a reporter who is badly injured in the Indian tsunami of 2004 and suffers a Near-Death Experience. Later, she finds herself obsessed with the afterlife and is unable to work. Frankie and George McLaren play a young London boy whose twin brother dies in a tragic accident and tries to find a way to communicate with him.

The movie doesn't actually answer any questions about the afterlife, and has often been called more of a movie about why people want there to be an afterlife.