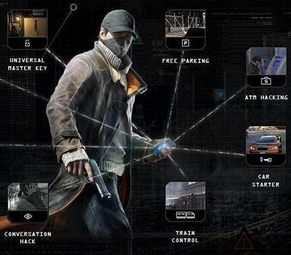 Smartphones. Not just for playing Angry Birds anymore.
Hacker Man: Wait a minute. Using an RX modulator, I might be able to conduct a mainframe cell direct and hack the uplink to the download.
Kung Fury: What the hell does that mean?
Hacker Man: It means that with the right computer algorithms, I can hack you back in time. Just like a time machine.
— Kung Fury
Advertisement:

If it's a computer, it's vulnerable. No further questions.

A Cracker or Playful Hacker can cause unlimited harm/mischief in the TV world because any computer, or any device with a CPU as a component — or even with a few strands of copper wire in it — is connected to the Internet and thus becomes easily accessible and subvertible to the character's hacking skill. Everything from NORAD to traffic lights to the engine computer in your SUV can be tampered with and shut down from a laptop in a room thousands of miles away. This openly defies the fact that in neither case are said computers actually online in a way that is reachable by someone on a modem.

Here, everything is online. There are no closed systems that aren't connected to the internet at large, and any machine can be plugged into or have its electronics easily screwed with from afar. All you need is a wireless connection and some illegal programs - and voila, you're in.

This being said, writers were probably just getting a bit ahead of themselves, as this Cyberpunk trope is increasingly becoming Truth in Television. As ubiquitous internet connectivity becomes essential for almost any electronic gadget or device, everything from cars note which are now being marketed at the Consumer Electronics Expo to military networks will become increasingly hackable via the internet. Even without an explicit internet connection, many devices have varying types

which to a skilled adversary are as good as an internet connection.

One would assume that any security-sensitive computer system would avoid being connected to anything. It is so, and there do exist a number of regional and even global networks that are completely separate from the Internet and are often built with different technologies.

Yet, every such barrier means tons of wasted work time (which equals wasted money for the company) for users and sysadmins alike, and it costs an obscene amount of money to build and maintain such networks for only a few parties to use. Very few organizations have the resources or the will to construct their own air-gap networks, so all the traffic flows over the public Internet or telecommunications networks protected by VPNs and firewalls. Same goes for different technologies: every piece of software logic ever created for TCP/IP, WWW, or any of the many related protocols and standards need to be reimplemented if one needs it for a service built on a different technology, making the latter severely lack in features in comparison. Then, as the technologies behind the Internet pass the test of time, scrutiny and the resulting security fixes over the years — having had far more exposure to threats than any in-house tech ever could — physically separating communication channels for a system to stay secure becomes less and less of a requirement. Finally, even if a private network is air-gapped properly, this is still not a complete guarantee of security, as famously demonstrated by Stuxnet, which is thought to have spread to Iranian nuclear facilities through USB drives. Even supposedly closed-access systems aren't, as demonstrated by Chinese hackers stealing fighter jet plans from the US government. So nowadays, even control units for critical infrastructure only come with an RJ-45 connector and a hard-coded ability to speak IP.

Still, there remain some gross exaggerations like the ability to erase a person's existence by deleting his identity records. In Hollywood reality, physical records like paper birth certificates and driver licenses are always null and void if the computers can't find a digital copy.

This trope is usually how an Evil Computer manages to subjugate humanity: By shutting down or reprogramming everything electrical in the world, from nuclear missiles to street cameras to light bulbs. This trope is also part of the Internet Safety Aesop since people can learn how much a hacker can access online.

Of course in a series set in the Present Day (or just twenty minutes from now) it might make sense to assume that most things have a connection of some kind, despite that no matter how networked the world gets, there will always be systems kept offline for security reasons.

Compare: It's a Small Net After All, Plug 'n' Play Technology. The Other Wiki calls the real-life version of this the "Internet of Things"

(no, not the Internet of Stuff).

"It's all about streaming."

Luz and King end up losing the race, but Eda tells King to just livestream his message to his father on Pentstagram instead, saying that "nobody uses crystal balls anymore".

"It's all about streaming."

Luz and King end up losing the race, but Eda tells King to just livestream his message to his father on Pentstagram instead, saying that "nobody uses crystal balls anymore".