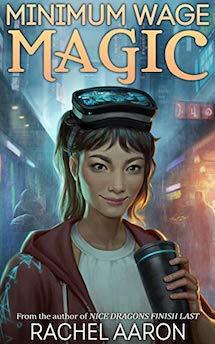 She cleans up nicely
"Gonna be one of those jobs, I see."
— Opal Yong-ae
Advertisement:

Opal Yong-ae is a Cleaner, a freelancer who cleans out empty apartments in the hopes of finding something valuable she is allowed to sell. Facing a mounting debt to a very dangerous individual, she takes a few jobs she shouldn't and finds a dead body in one of the apartments. This leads her to a conspiracy of torture and mayhem, hopefully with a very large payout on the other side.

Because in the Detroit Free Zone, anything is possible—but there is no one to protect you.

Sequel to The Heartstrikers series, the first book, Minimum Wage Magic, was released in November 2018. The second, Part-Time Gods, was released the following year on June 9th. The last book in the series, Night Shift Dragons, was released May 5th 2020.