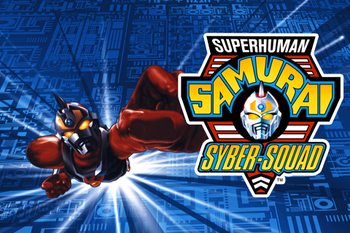 Tim Curry adds "hammy virus villain" to Transformers: Generation One.
"The evil Kilokahn lives inside computer circuits! With the help of Malcolm Frink, he creates Megavirus Monsters to attack electronic systems! Meanwhile, a freak accident turns Sam Collins into Servo! His friends join forces in their samurized attack vehicles! Together, they transform into... the SUPERHUMAN SAMURAI SYBER-SQUAD!"
— Opening Narration (as provided by Gary Owens)
Advertisement:

Yet another in the wave of post-Power Rangers American superhero shows adapted from Japanese tokusatsu series. Adapted from Tsuburaya Productions' Denkou Choujin Gridman ("Electric Superhuman Gridman"), Superhuman Samurai Syber-Squad (yes, that is "Syber" with an "S") tells the story of Sam Collins, a high school student, guitarist and video game programmer who, after being hit by a power surge through his guitar, briefly vanishes, only to reappear with a wrist-mounted doohickey!

At the same time, the same power surge, presumably, strikes a military base. Using it as a distraction, the AI Kilokahn (voiced by Tim Curry) escapes into the internet and pops onto the monitor of Sam's classmate Malcolm Frink. Malcolm enjoys designing monsters, and Kilokahn offers to bring his monsters to life as Megavirus Monsters to attack computers. Malcolm agrees, because he's just that kind of malcontent.

Later, Sam, still having an unknown phlebotinum attached to him at the wrist, tries to call a girl he recently met, only to be interrupted when a Megavirus Monster attacks the phone company, disrupting every telephone on the planet. Dejected, he notices strange activity on his computer in the form of a model called the Servo Program. While he checks it out, yet another power surge hits, this time drawing him into Cyberspace. He takes the form of Servo, and is forced to fight the Megavirus, which he has been transported to. The rest of the band, Syd, Tanker, and Amp (later replaced by Lucky) assist using "helper programs" that take the form of "samurized attack vehicles" which can fight the Megavirus independently. They can join together into a single robot, called Zenon, or combine with Servo to form Synchro. Later, they gain another set of vehicles which can transform into Drago and combine with Servo to form Phormo.

The show was notable in that, unlike most other toku adaptations of the time but like international coproductions in their flagship Ultra Series before and after this series, Tsuburaya themselves had direct involvement with the production, resulting in some retained plot elements, similar characterisations and reused sound effects.