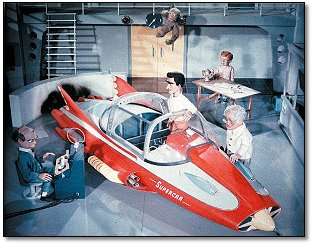 "It's Mercury-manned, and everyone cries, 'it's the marvel of the age'."
Advertisement:

Supercar is a 1960s British children's TV show produced by Gerry Anderson. This was his first series to declare itself "Made... in Supermarionation!". (His previous series, the western Four Feather Falls, had pioneered the technology, but this was when they came up with the catchy name.)

Invented by Professor Popkiss and Doctor Beaker and piloted by Mike Mercury, Supercar is an amazing vehicle that can fly, go underwater, and even be driven. When pilot Bill Gibson, his little brother Jimmy and their pet monkey Mitch are rescued by the team in the first episode "Rescue," Jimmy and Mitch become part of the Supercar family coming to the aid of people in distress around the world while fending off evil Masterspy and his henchman Zarin, who'll stop at nothing to get Supercar for themselves.