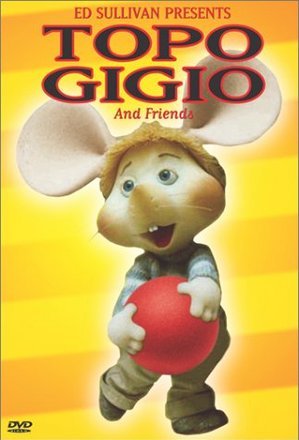 Topo Gigio (Italian for mouse —topo— and the derivative "Gigi" for Luigi —Louis—, thus meaning Louie Mouse) is an Italian puppet character mouse that sprung a franchise of children's products around the world, particularly popular in the Latin World note  as in countries that speak a Romance language, most notably Italy, Spain, Portugal and Latin America. Although the character also debuted in the US and other non-Latin countries. In the US it had recurring appearances in The Ed Sullivan Show.
Advertisement:

Topo Gigio was created in 1958 by puppeteer Maria Perego and both the puppet and the technique used in it were revolutionary at the time, especially for the way it opened and closed the eyelids, moved the mouth, and for the specially made and very detailed miniature clothing that wears. It became a hit and popular culture icon in Italy during The '60s and spawned a big franchise with animated series, comics, children's music, and two movies. When the show was exported to other countries, particularly in Europe and Latin America, it became a hit as well. The show was remade in different languages generally with a well-known celebrity (usually Talk Shows hosts) in their respective countries or regions, some of them were Chris Howland for Germany and Austria and Raul Astor (later Julio Alemán) for Latin America. Nippon Animation also made an anime series