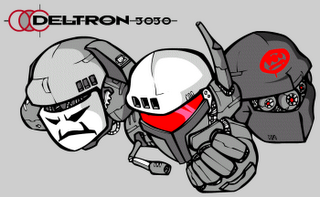 Much like Nakamura's previous conceptual projects, Dr. Octagon and Handsome Boy Modeling School, Deltron 3030's self-titled album and single sends the hip-hop triumvirate into the year 3030, where — as the sole survivors of earth — they travel through the galaxy.

Both the album and single were released in 2000 on 75 Ark Records. An album of instrumentals tracks from Tron 3030 followed a year later.

Deltron 3030 is also known for two of its members (Del Tha Funkee Homosapien and Dan "The Automator" Nakamura) later working with Damon Albarn to form Gorillaz.

A sequel to Deltron 3030, called Deltron Event II, was in Development Hell for eight years, until on August 13th, 2013, they released a three-song EP "City Rising From The Ashes" (which you can listen to on the official Youtube channel here

among many other interesting choices. Also, they're bringing a 16-piece orchestra with them on tour.