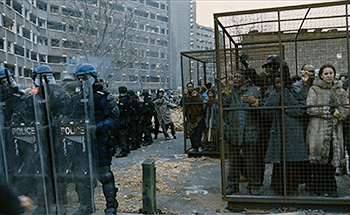 "Justice has a price. The price is freedom."
—Judge Dredd, "America"
Advertisement:

The stereotypical enemy of La Résistance, and a must have for any self-respecting Dystopia that is not in total anarchy.

Police Brutality is the standard operating procedure here and they are most likely incredibly corrupt. One popular portrayal is having them dressed perpetually as SWAT Teams. If they need a vehicle, they aren't likely to settle for a car. Fascists' Bed Time will be enforced.

Truth in Television, of course, but we won't list such situations. It's not always obvious when a country is one of these.