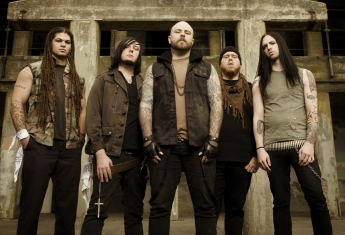 A Heavy Metal band formed in the early 2000s, Demon Hunter is one of the most popular Christian heavy metal bands outside of the genre's own community. The band has their own nickname for their fan base, calling their fans members of "The Blessed Resistance", as seen on their website.

Their music is classified by many as a unique cross between Metalcore, Groove Metal, and Alternative Metal, with a little bit of Nu Metal as well, particularly in their first two albums. Despite critical acclaim and the many aforementioned fans outside of Christian groups, the band has found little mainstream success as of yet, though they have had some of their videos played on MTV's Headbangers' Ball.

They are also known for their iconic mascot, the symbol of a bull-like demon with a bullet hole in its head, which has appeared on stickers, t-shirts, hoodies, and every single one of their album covers.