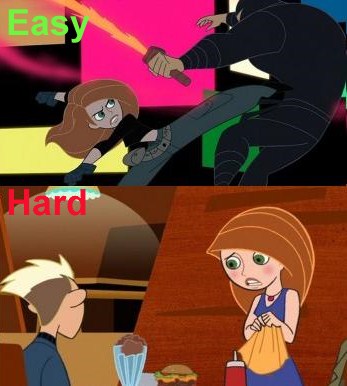 A Socially Awkward Hero is a heroic character who shows tremendous courage in the face of life-threatening danger... but becomes overwhelmed with knees-knocking fear in ordinary social situations. For such a character, confronting a legion of sociopaths and a chainsaw-wielding maniac is far preferable to meeting his girlfriend's family or making idle chitchat at a cocktail party. Extremely common in shows for the kid and teen audiences, since viewers of that age often feel socially awkward themselves.

This is to some extent Truth in Television; studies have shown that social situations can be stressful in the extreme, and that people can (literally) prefer death to public embarrassment; but even that being considered, some examples of this seem to be parodies of this concept nonetheless.

Often a feature of the Defective Detective, Endearingly Dorky, and Ambiguous Disorder. Audiences may find this character Adorkable. Compare and contrast This Loser Is You and Wake Up, Go to School, Save the World. See also No Social Skills.

Contrast the Super Loser, whose personality remains consistently disappointing regardless of whatever badass power they might have.