Webcomic / Alice and the Nightmare 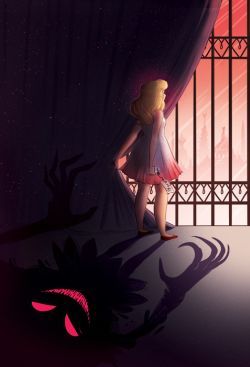 Alice and the Nightmare

) is a fantasy comic heavily based on Lewis Carrol's Alice's Adventures in Wonderland, updating Tuesdays and Fridays.

In the Wonderland and Looking Glass Territories, energy gathered from dreams of Earth's humans is used to power everything, from magic to magitek. Collecting this energy are oneironauts, people with magical abilities, sorted into four Suits — Hearts, Clubs, Spades and Diamonds. To learn how to harvest dreams — and face Nightmares, Always Chaotic Evil creatures inhabiting the dream lands — people attend Phantasmagoria University. Our hero, Alice Heart, a protege of the Red Queen, is one of those people, and she begins attending the Phanty U intending to become an oneironaut. There is more afoot, however — a secret concerning Alice herself, one she has no idea about.

The comic had a first run that has now been taken down (essentially a different Chapter 1 with many different details changed, both story-wise and in design — starting with a much thinner Alice) before being rebooted into the form that is known today. The original Chapter 1 and 2 are available through archive.org for the curious and the nostalgic.

Alice and the Nightmare provides examples of: