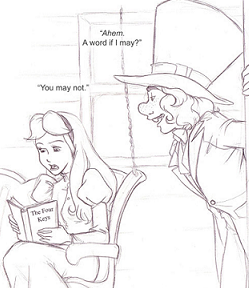 Their relationship in a nutshell
Advertisement:

When Curiosity Met Insanity, often abbreviated as WCMI, is an Alice in Wonderland webcomic that is partly based on the original book, partly based on the Disney movie, and partly based on the Disneyland version. The premise is that, at age 18, in order to escape an arranged marriage, Alice Lidell manages to find her way back to Wonderland, which is connected to the Disneyland park, along with all of the other lands that various Disney movies have been set in, like spokes around the center of a wheel. She meets up with old friends, like the March Hare (Ears, to those who know him personally), and new ones, like Belle. The Mad Hatter, or Reginald L. Theophilus (The Third!), figures prominently in this story, too, as Alice's love interest. Or so he would like to think. He is quite in love with her, she thinks him annoying. After getting off on the wrong foot, however, he is starting to win her over.

Its archive is located here

.After a long hiatus, updates resumed on October, 6, 2014, with the archive still found on Livejournal but the actual comic being moved to Tumblr

Tropes displayed by this work include: