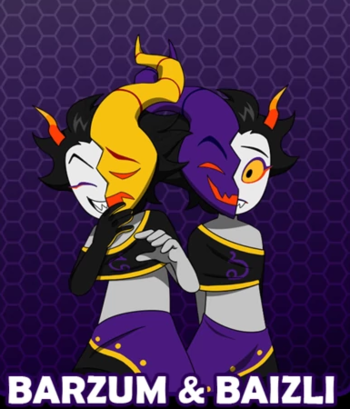 No relation to those other two

.
"If you did have a twin brother, why would his name need to sound similar to yours?"
— Carly Shay, iCarly
Advertisement:

When twins appear in fiction, it's very likely that they will be named to sound like a matched set. Common options are rhyme (Tyler and Skyler); Alliteration (Michael and Mitchel); theme (Dawn and Eve); anagrams (Amy and May); or variants of the same name (Daniel and Danielle). Bonus points if the twins have dissimilar full names but usually go by nicknames which fit this trope, like James and Timothy Possible being known as Jim and Tim.

The names will flow together like water to the point that the characters will always be mentioned together like Phil and Lil from Rugrats; as a result, this trope very common with Single-Minded Twins.

Also, a character's Evil Twin will often have the same name as the character, only reversed, e.g. the evil twin of Alfred will be named Derfla. Of course, if the character's name is something like Bob, this leads to some confusion.

In Japanese and other syllable-based languages this is especially common, because twins often end up sharing either the first or the final characters of their names.

Most definitely Truth in Television. Like most twin tropes, this annoys the hell out of many real-life twins. Child psychologists even advise parents against the practice. It may sound cute for babies, but once they get older, it can impede their development as individuals.

A subtrope of Family Theme Naming.