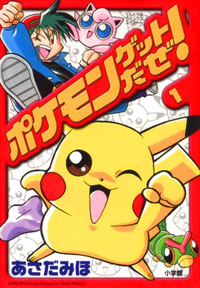 Pokemon Getto Da Ze! is a Pokémon manga released in 1999. It stars a trainer named Shuu and his adventures with his talking Pikachu.

Shuu is a young boy who can understand and communicate with Pokémon using a headset-shaped device. He is on a journey to catch many Pokémon.

Getto Da Ze is a collection of short stories depicting Shuu's adventures. It doesn't follow the plot of the games and doesn't contain either any gym leaders or Team Rocket. The manga consists of five Japanese only volumes.