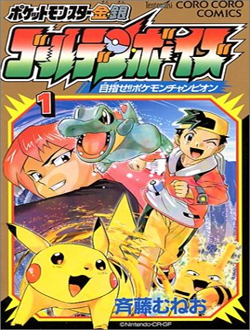 "There are trainers who work hard everyday for Pokémon championships. These talented boys and girls... They are known as... The Golden Boys!"
— Gold
Advertisement:

Pokemon Golden Boys (Pokemon Kin Gin: Golden Boys in Japanese) is a manga written and drawn by Muneo Saito, and based on Pokémon Gold and Silver, eventually including Pokémon Crystal elements. The manga ran in CoroCoro Comic from November 1999 to September 2001.

Its full name is Pokémon Gold & Silver: The Golden Boys. It follows the basic story of the games quite well, with quite a few twists added in. Rare for a Pokémon adaptation, it shows characters eating meat and shows cars quite explicitly.

Gold, a determined young boy, is asked by the well-known Professor Elm to go to Mr. Pokémon in Cherrygrove City. With his new Pokémon, a Totodile, he invokes on a mission to meet this man and fulfill his mission. He encounters the mysterious Black, who becomes his rival. Unable to find Mr. Pokémon he goes on a journey to find him, fighting gym leaders on the side.

Not to be confused with a Pokémon adaptation of Golden Boy.