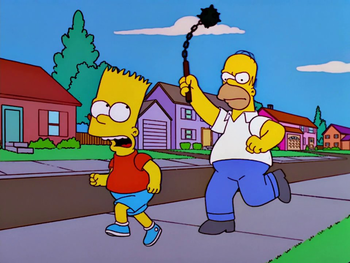 I'LL MACE YOU GOOD!
"It all began on the day of my actual birth. Both of my parents failed to show up. By the age of 5, I had to throw myself my own surprise party."
— Dr. Doofenshmirtz, Phineas and Ferb
Advertisement:

When Abusive Parents are Played for Laughs.

In the real world, child abuse is a traumatic event that can warp a child's psyche, causing them extensive physical and psychological problems, such as post-traumatic stress disorder (PTSD), as they develop into adults. Sometimes, abused children will go on to abuse children themselves. It's a horror that takes years of intensive therapy and anger management to recover from, and, worst-case scenario, it can stay with you for life. Another possible unfortunate outcome is the abused child putting an end to their own life. Therefore, No Real Life Examples, Please!

In the media, on the other hand, a fair amount of Black Comedy can come from a character's horrible childhood. Notably, such comedy seldom includes sexual abuse (unless you're a writer for South Park or It's Always Sunny in Philadelphia), which tends to take things into Dude, Not Funny! territory if it's molestation or rape. It's usually Parental Neglect, physical abuse (though, due to changing values, that's falling a bit out of favor), exaggerated takes on Parental Favoritism and Sibling Rivalry, witnessing events and things that are Harmful to Minors, or abuse so over the top that it's exaggerated to the point of comedy.

This can be played for laughs and seriousness alternately, especially if the characters are comically screwed up already and their parents are shown to be equally or (often) more messed up.

In the case of anime and manga, there's VERY heavy Values Dissonance in this regard. A smack to the head does not get the same reaction in Japanese culture as it would in America.

Related to Dysfunction Junction, Badly Battered Babysitter, Babysitter from Hell, and Poverty for Comedy. A Boarding School of Horrors can also cause this, although it’s more often Played for Drama.

Dr. Venture is a lousy parent, and most of it is the fault of his father Jonas Venture and the other members of Team Venture. He opens up to his son Hank about what his life was like growing up with Jonas Venture for a father.

Dr. Venture is a lousy parent, and most of it is the fault of his father Jonas Venture and the other members of Team Venture. He opens up to his son Hank about what his life was like growing up with Jonas Venture for a father.