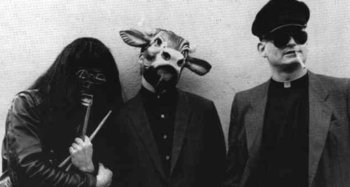 Nomeansno (sometimes written as NoMeansNo or No Means No) were a Canadian punk band formed in 1979 in Victoria, British Columbia by bassist Rob Wright and his younger brother John on drums and keyboards. Later on they were joined by guitarist Andy Kerr, who left in 1992 and was replaced by Tom Holliston. Second drummer Ken Kempster played with the band from 1993-1997 before they went back to being a trio.

Nomeansno’s sound was characterized by Rob’s groovy and darkly melodic basslines, John’s precise and powerful drumming, and—especially during the Andy Kerr years—screeching, rhythmic guitar. Their lyrics were often bizarre and surreal, sometimes violent and horrific, but just as often (if not simultaneously) humorous or comedic. Their genre-bending ways, musicianship, and use of atypical rhythms and time signatures often gets them categorized as jazz punk, and they are widely considered forerunners of math rock.

The band formed in 1979 after Rob and John saw Vancouver punk rock legends D.O.A. play a chaotic show at the University of Victoria on March 23 of that year; from then on, John was enamoured with punk rock. Taking their name from an anti-rape slogan, they rehearsed and made home recordings in their parents’ basement and released their debut single, a surreal synthpop song called "Look, Here Come the Wormies", in 1980.

They began to play live as a drums-and-bass duo in 1981. Their debut full-length Mama was released the following year, and the year after that they persuaded guitarist Andy Kerr (John’s former bandmate in the local group Infamous Scientists) to round out their lineup. Around the same time, the band began moonlighting as a Ramones cover band called The Hanson Brothers—named after characters in the movie Slap Shot—for which they eventually began writing their own hockey-themed Ramones-esque songs.

Nomeansno’s second full-length, 1986’s Sex Mad, featured the minor college radio hit “Dad”, in which the teenage narrator details an evening of horrific domestic abuse. Around this time, Rob developed nodules on his vocal cords, leading Andy to take over as main vocalist. The band signed with former Dead Kennedys frontman Jello Biafra’s label Alternative Tentacles and released the EP The Day Everything Became Nothing and the album Small Parts Isolated and Destroyed. By the following year, Rob’s larynx had sufficiently healed and he resumed lead vocalist duties in time to record what is widely considered the band’s greatest album, the 1989 LP Wrong.

In 1990 Biafra recorded a song with Nomeansno, “Falling Space Junk”, for the soundtrack to the low-budget dystopian satire Terminal City Ricochet in which Biafra played a supporting role. A full-length collaborative album, The Sky Is Falling and I Want My Mommy, was released in 1991 and led to the band's enduring popularity in Europe. The same year they released 0 + 2 = 1, the final album to feature Andy Kerr, who left the band to emigrate to The Netherlands. In 1992, The Hanson Brothers (now featuring drummer Ken Jensen to allow John to focus solely on singing) recorded their debut full-length album Gross Misconduct and John produced D.O.A.’s comeback album 13 Flavours of Doom.

Nomeansno carried on as a duo for a time, recording and releasing the album Why Do They Call Me Mr. Happy? in 1993, with Rob handling both guitar and bass, before joining forces with guitarist Tom Holliston (who had already been playing with Rob and John in The Hanson Brothers) and second drummer Ken Kempster. In 1994, Sepultura cancelled an appearance at the Roskilde Festival in Denmark and Nomeansno were brought in to replace them; they ended up playing for 60,000 people immediately after Peter Gabriel.

Tragedy struck in early 1995 when Ken Jensen died in a fire caused by a discarded cigarette in a house with no smoke detector. Jensen had also been drumming for D.O.A., and John handled both production and percussion duties on the band’s next album The Black Spot. Later the same year, Nomeansno released their first album with Tom Holliston, The Worldhood of the World (As Such), the title of which was inspired by Rob’s interest in the writing of existentialist philosopher Martin Heidegger.

The Hanson Brothers released their second album Sudden Death in 1996, with Ken Kempster taking over for Ken Jensen on drums. The album featured a cover of Canadian troubadour Stompin’ Tom Connors' classic “The Hockey Song”, the music video for which became popular on MuchMusic.

Touring with two drummers had become a logistical and financial headache for Nomeansno, and the band was a trio again for their next album Dance of the Headless Bourgeoisie. The album took a much more experimental, avant-garde approach than previous records and featured some of the band’s longest songs to date. Reception was mixed, and John later said it was “not our greatest effort”.

The band’s next album, One, was released in 2000 and was much more well-received. It featured two cover songs: a slow, plodding rendition of The Ramones’ “Beat on the Brat” and a 15-minute-long cover of jazz legend Miles Davis’ “Bitches Brew”.

In 2002, Nomeansno left Alternative Tentacles and The Hanson Brothers released their final full-length album My Game (the cover and title song of which parody Black Flag’s My War) on Mint Records with new drummer Ernie Hawkins. Nomeansno’s output slowed after this, and it wasn’t until 2006 that they released what turned out to be their final full-length album, All Roads Lead to Ausfahrt.

The band unceremoniously announced their retirement in 2016, shortly after Tom Holliston announced he was leaving the group. Their last show was an acoustic performance in their hometown of Victoria the previous year celebrating their induction into the Western Canadian Music Hall of Fame.

as The Hanson Brothers: