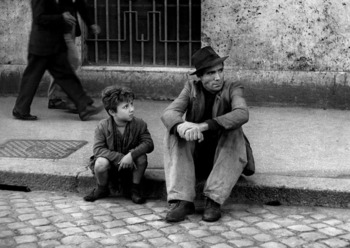 Sure would be nice if they had a bike.
If Fascist Italy covered up the truth about Italian society with their white telephone films, Italian Neorealism was a post-fascist and late-fascist attempt at Brutal Honesty: show just how much life can suck for the people at the bottom rung of society, point out how poverty and poor people have stories and adventures where "little" things cause tremendous tragedy, and how almost anyone in the world, regardless of class is a Hero of Another Story which is also The Greatest Story Never Told.
Advertisement:

The first Italian neorealist film is traditionally credited to be Roberto Rossellini's Rome, Open City in 1945. This was produced, made, and shot right after the liberation of Italy, made with left-over film stock bought from the black market, and while it had major stars (namely comedian Alberto Soldi in a serious role as well as Anna Magnani's Star-Making Role), it turned heads for its use of non-professional in background roles, and its use of real locations, where background shots emphasized wartime devastation. Rossellini's second film Paisan is considered the actual beginning of neorealism, since it had no stars, non-professionals in leading roles, and used even more location shooting than the previous one. The most famous of all Italian neorealist films, and arguably the most famous Italian film was Vittorio De Sica's Bicycle Thieves which was a bleak, sad, sentimental and compelling story about how a poor father has his life wrecked when his bicycle, on which he depends on for his work, gets stolen.

Italian Neorealism has always been a very confusing and slippery term. Almost all of the original neorealists disavowed it when it was applied to them and their films, at least when it was no longer convenient to use as a label to market their films. Film historians now argue that it pointed the way to a different kind of cinema and inspired possibilities greater than it actually fulfilled. For instance, Italian neorealism inspired independent filmmakers across the world, and was representative of "non-Hollywood" films. In actual fact, the original Italian neorealist films were made with the help of American producers, and was distributed by Hollywood studios. It also came to typify cheap and No Budget film-making when in fact the original neorealist films were among Italy's most expensive films (Paisan had the record before Bicycle Thieves broke it), since shooting on location was far more expensive than it was to shoot on sets.

Nonetheless, in the years of its release and afterwards, Italian Neorealism had a huge and defining impact on international cinema, playing a major role in heralding the market for world cinema, for encouraging other countries to fund directors to shoot on the margins and document poor people, and generally offer a less pretty take on society and culture. The likes of Satyajit Ray, Abbas Kiarostami, Luis Buñuel among many others were inspired by Neorealism, and the films were also championed by the French New Wave, British Kitchen Sink Drama producers, John Cassavetes and many many others.