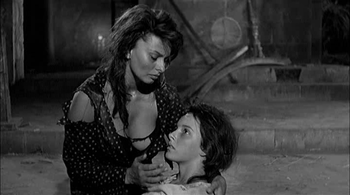 Two Women ("La ciociara") is a 1960 Italian film based on a novel of the same name by Alberto Moravia.It is directed by Vittorio De Sica and stars Sophia Loren and Jean-Paul Belmondo.

Loren is Cesira, a widow and mother to a pubescent girl, Rosetta, in 1943 Italy, as the Allies are slowly fighting their way up the peninsula. After an Allied bombing raid on Rome, Cesira takes her daughter out of the city and to her hometown in the Italian hills. They are safe from bombing but the privations of war hit the countryside as well, as food grows short and the front lines slowly approach. Cesira draws attention from the village's local intellectual, Michele (Belmondo), a serious young man with socialist sympathies. A romance has just started to bloom when the fortunes of war intervene.

Two Women established Sophia Loren, already world famous as a sex symbol, as a serious actress as well. It won her an Academy Award for Best Actress, and she remains to this day one of only two women to win an acting Oscar for a performance not in English, the other being Marion Cotillard for La Vie en Rose.