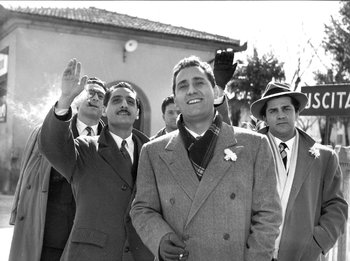 I Vitelloni is a 1953 film directed by Federico Fellini.

It involves five slackers living in a small town on the Adriatic coast of Italy, and their supposedly carefree lives. One of them, Fausto, blows this when he gets his girlfriend pregnant and is forced to marry her. That doesn’t mean he doesn’t try to seduce other women, though.

Fausto's friends try to be supportive while keeping their lifestyles: Alberto is supported by his mother and sister, Leopoldo writes a play, Riccardo tries to keep his singing act, and Fausto’s brother-in-law Moraldo tries to get away from it all.

Breakthrough hit for Federico Fellini. It was one of Stanley Kubrick's and Martin Scorsese's favorite movies.