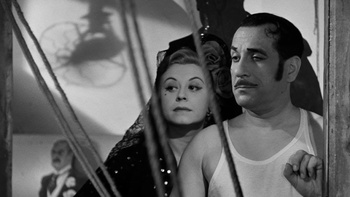 Variety Lights is a 1950 film co-directed by Federico Fellini and Alberto Lattuada.

Checco is a performer in and manager of a third-rate traveling vaudeville group. They are living a hand-to-mouth existence; the gate receipts at one show are confiscated due to unpaid bills, and two members of the troupe have to hide in a train bathroom because Checco can't afford tickets for everybody. Checco however still has the undying loyalty of his lover, troupe member Melina Amour (Giuletta Masina, Fellini's wife).

In the audience at that show where the gate receipts are confiscated is a very good-looking young woman, Liliana (Carla Del Poggio, Lattuada's wife). Liliana wants to break into show business and manages to get Checco to hire her, much to the displeasure of the other troupe members. Soon, however, she's the star attraction. Middle-aged Checco falls in love with gorgeous young Liliana, much to Melina's sorrow. Eventually he leaves the rest of his troupe behind and becomes her business manager, even as Liliana bleeds him for money while also looking for a richer patron.

Fellini's first film as a director, after he had spent a few years writing screenplays in the Italian movie industry. Sophia Loren made her film debut as an extra, and can be seen as one of the chorus girls dancing behind Liliana at the 29-minute mark.