Film / It Came from Outer Space 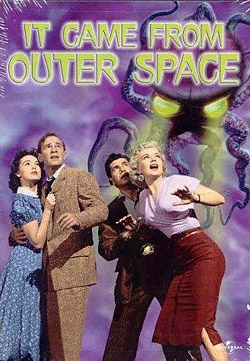 A 1953 Science Fiction film best known for subverting some of the typical Alien Invasion tropes. Based on a script by noted SF author Ray Bradbury, its title has become part of popular culture though the film itself is more obscure.

Set in the Arizona desert, the movie begins with a meteor-like object crashing near a small town. A local scientist named John Putman and his girlfriend investigate, thinking it's a UFO, but find no evidence of it.

However, the audience sees something watching them and other people (though not exactly what — we are shown things from the "monster's" alien viewpoint). People from the town start to get captured and replaced with emotionless doubles. The protagonist notices but cannot convince the other townsfolk of it at first; eventually he confronts one of the aliens, who reveals that... they have crashed on Earth by accident, and just want to repair their spaceship and leave. Knowing the humans would be repulsed by their true appearance, they were forced to act secretly to obtain the materials they need. The alien proves his point by revealing its true form to the hero, who indeed recoils in horror.

Eventually, the local sheriff becomes convinced that the alien 'invasion' is real, and gathers a posse to attack the aliens in their hiding place (a mine). One of the aliens is apparently killed before Putman can straighten things out. Fortunately, the aliens don't retaliate, instead returning all the replaced people (including the hero's girlfriend) unharmed, and then they take off back into space in their by-now fixed spaceship, with the Aesop of 'not fearing that which is different' having (hopefully) been learned by the cast.

The movie's use of a "fishbowl lens" camera (for the aliens' viewpoint scenes), creepy music, and foreboding desert vistas help sustain its atmosphere of suspense.

The movie had a remake in the 80s, with a different cast and alien designs, but basically the same story (except that there's just one alien lifeform, that splits into many.)

The title of the movie is often referenced or parodied, as can be seen even here in TV Tropes.