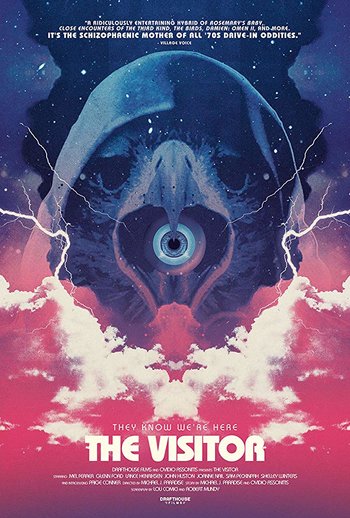 The Visitor is an Italian/American 1979 science fiction/horror film starring Lance Henriksen, Glenn Ford, and John Huston. Noted actors Mel Ferrer, Sam Peckinpah, Franco Nero, and Shelley Winters also appear. The film tells the surreal, hallucinatory story of a benevolent alien who has come to Earth in pursuit of a child named Katy (Paige Connor) who may be a descendant of a malevolent alien intelligence known as Zateen. The girl's hapless mother, Barbara (Joanne Nail) becomes swept up in the frightening struggle between the two entities, while her boyfriend (Henriksen) and physician (Ferrer) represent a sinister organization which has its own disturbing plans for Barbara and Katy.

The film is noteworthy for its all-star cast, some trippy visual effects sequences and for revisiting the Satanic horror tropes popularized by films of the era such as The Omen, The Exorcist, and Rosemary's Baby, but with a science fiction twist.

Recieved the RiffTrax treatment in 2019.