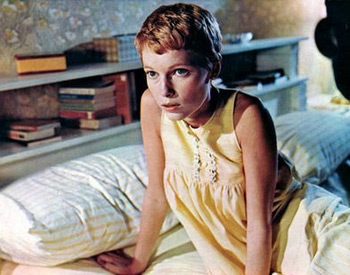 "He chose you, honey! From all the women in the world, to be the mother of his only living son!"
— Minnie Castevet
Advertisement:

A 1967 horror novel by Ira Levin, Rosemary's Baby became much better known as a 1968 film adaptation by Roman Polański, the second film in the director's so-called "Apartment Trilogy" (along with Repulsion and The Tenant).

Young housewife Rosemary Woodhouse (Mia Farrow) moves into an elegant-but-gloomy old Upper West Side apartment building with her actor husband Guy (John Cassavetes). Their new neighbors are Minnie and Roman Castevet (Ruth Gordon and Sidney Blackmer), an elderly couple who seem nice enough at first. Shortly after experiencing a very bad dream, Rosemary finds herself pregnant... and then things get very weird for her.

The film version received high praise for its close following of the novel, going so far as to replicate much of its dialogue word-for-word. The film's producer, William Castle, once speculated that this was at least partly because Polanski had never done an adaptation before and didn't know he was allowed to make changes. The Bramford, where all the action takes place, was deliberately modeled on the Dakota in Manhattan (where John Lennon later lived, and where he would eventually be murdered). Exterior shots of the Bramford in the film are of the Dakota, but, due to the exclusive privacy policies of the building, the interior shots were filmed on a soundstage.

The film received a made-for-TV sequel, Look What's Happened to Rosemary's Baby, in 1976, while Ira Levin wrote a sequel to the novel, Son of Rosemary, in 1997. It also received a Mini Series remake on NBC in 2014, written by Scott Abbott (Queen of the Damned) and starring Zoe Saldaña as Rosemary. Unlike the 1976 sequel, it is based on both books by Ira Levin.

It’s also worth noting that in the horror anthology film, XX, one of the segments serves as a Stealth Sequel.