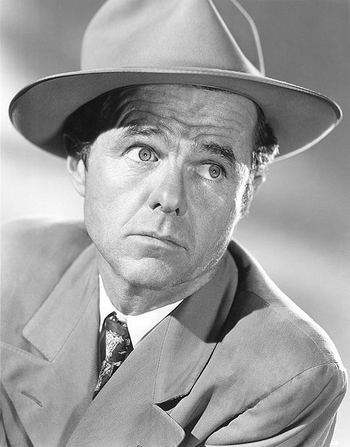 Elisha Vanslyck Cook Jr. (December 26, 1903 – May 18, 1995) was an American character actor who typically specialized in roles as cowardly villains and neurotics. He was, in short, the poster child for the Ineffectual Sympathetic Villain. Slightly built, with a soft raspy voice and bug eyes that gave him something of a baby-faced appearance, Cook has been jokingly referred to as the screen's "lightest heavy".

Born in San Francisco but raised in Chicago, Cook debuted on stage at age 14 and worked in vaudeville, in stock companies, and on Broadway. His only film appearance prior to 1936 was re-playing his stage role, the romantic juvenile lead, in Her Unborn Child (1930). After more work on Broadway, he settled in Hollywood in 1936. From then on, he was typecast as small-time criminals. His best-known role was that of Wilmer in The Maltese Falcon (1941), the gunsel to whom Humphrey Bogart's Sam Spade spat: "The cheaper the crook, the gaudier the patter". He is also remembered for the sexual innuendo in his scene as the mysterious drummer Cliff March in Phantom Lady (1944).

He appeared in movies until the early 1980s and on television through the rest of that decade. He suffered a loss of speech due to a stroke in 1990. By the time of his death at age 91, he was the last surviving member of the Maltese Falcon cast.