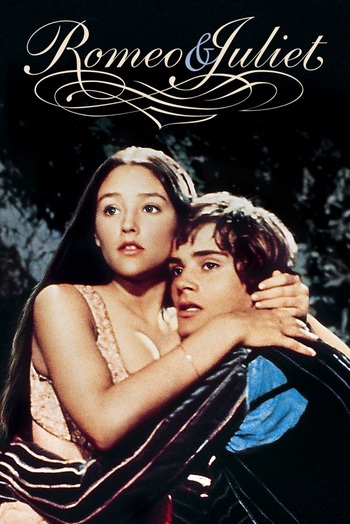 It stars Leonard Whiting as Romeo and Olivia Hussey as Juliet, and was the first major production to cast actual teenagers in the roles.

The supporting cast included Michael York as Tybalt. Laurence Olivier giving the opening and closing narration, and also dubbed the voice of the Italian actor who played Lord Montague. Bruce Robinson, who plays Benvolio, went on to a long career as a screenwriter and director of movies like Withnail and I. Nino Rota composed the score.

The film gained a measure of infamy at the time for featuring teen-aged Romeo and Juliet partially naked during a scene (the urban legend that Hussey was refused entry into the film because she wasn't old enough is almost certainly false).

It was nominated for four Academy Awards, winning for cinematography and costume design. Compare the 1936 version, Romeo and Juliet, and the 1996 version, William Shakespeare's Romeo + Juliet.