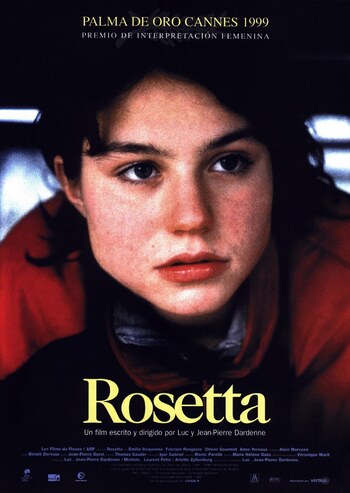 Rosetta is a 1999 film from Belgium directed by Jean-Pierre and Luc Dardenne.

Rosetta is a girl in her late teens (actress Emilie Dequenne was 18) who lives with her mother. Their home life is not a happy one. They live in a sad, grim trailer park. Mom is a raging alcoholic who is so far gone that she trades sexual favors for booze and sometimes passes out outside. They are so poor that they appear to be on the edge of starvation, with Rosetta forced to supplement their diet with fish she poaches from the nearby river.

As the film opens Rosetta loses a temp job that she desperately needs at a factory. She scrounges around and gets a second job working at a bakery, but loses that after a couple of days when the baker's idiot son flunks out of school and needs employment. Before she loses that job, however, she meets Riquet, an affable young man who works at the baker's outdoor waffle stand. Riquet takes a liking to Rosetta and maybe, just maybe, represents a way out of her life of misery and squalor—but she makes a fateful decision.