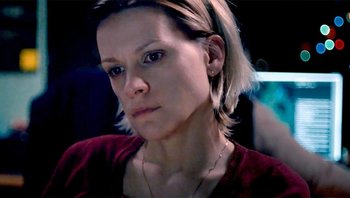 A Sister (Une Soeur) is a 2018 short film (16 minutes) from Belgium directed by Delphine Girard.

A woman manning the phones at an emergency services desk gets what seems to be a wrong number. The woman on the other end of the line, who's named Alie, speaks as if she's talking to her sister Lulu. However, the operator quickly figures out that Alie actually did mean to call emergency services, as she has been kidnapped by Dory, the man driving the car. The operator has to figure out how to get from Alie information about where they are going, so she can help Alie, without revealing to Dory that Alie is on the phone with authorities.