Trapped with the Therapy Session 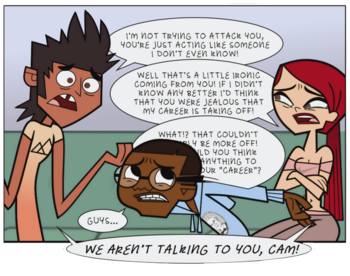 Kendra: I'm sorry, can we have a private moment?
Jax: I think we all wish you'd had this moment in private!
— Legends of Tomorrow
Advertisement:

Communication is important to any relationship, be it between spouses, lovers, siblings, parents and children, friends or co-workers. Without clear and open dialogue, issues between two people can build up and fester. A relationship with this kind of internal pressure can be subjected to external stress, i.e. the events of the plot, to the point where lingering personal issues have to be addressed now. Probably loudly, and at length. This will happen regardless of where the characters in question are, what they're doing, or who might be stuck with them as they do.

This trope refers to a situation where some poor soul is forced to be present as other people sort out their personal issues. This person will usually be a friend of theirs, and generally rooting for them to resolve things, just not while he's there. Unfortunately, they're in a locked room, lift, bank vault or some other environment that doesn't allow for a hasty exit. Faced with Too Much Information and unable to leave, this person will suddenly develop an intense interest in his own shoelaces, the pattern of the wallpaper, or even feign unconsciousness if the situation allows for it.

However they decide to handle it, the unwilling interloper will remain onscreen as they try not to hear, possibly as a Funny Background Event. They will usually be male, because Men Are Tough and hate feelings. The people having the discussion will usually have totally forgotten their presence and carry on as if they're not there.

Contrast with Talk About That Thing, where the pair excuse themselves before having it out, and Take Five, where the third party is given an excuse to leave. Overt Operative and Publicly Discussing the Secret are variants involving The Masquerade rather than emotional issues.