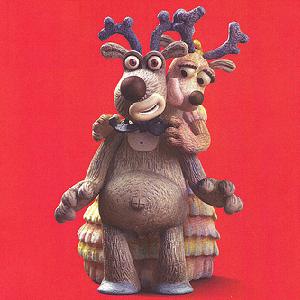 Robbie the Reindeer is a reindeer character who made his debut in the 1999 Christmas Special Hooves Of Fire.
Advertisement:

In the first one, Robbie, the son of Rudolph arrives at the North Pole in August to become the leader of Santa's sleigh. Unfortunately, he's out of shape and not particularly dedicated. Blitzen in particular is angered at the lazy reindeer, who also is in love with Blitzen's girl, Vixen. Robbie gets kicked off the reindeer team and has to work humiliating odd jobs, but he can't even do those right and thus considers himself a failure until Donner convinces him to participate in the Reindeer Games.

Robbie is then coached by Old Jingle, whose mental faculties are in question. Although he does get shaped up somewhat, Robbie ends up lagging in the race after having to rescue Old Jingle from his falling house. After a kiss from Donner, Robbie then starts breaking records in all of the Reindeer Games events. It comes down to a photo finish; Blitzen won by a nose, but is disqualified for taking drugs, so that means, of course, that Robbie won!

The first special was well received in the UK, where it's a Christmastime staple on the BBC. It was comparatively unknown stateside (having aired on Fox Family and all) until 2002, when CBS re-dubbed the entire special with American voices (and of course, a few dialogue changes). Ben Stiller took the title role, and other celebs who particpated include Brad Garrett, Britney Spears, James Belushi, Hugh Grant, Dick Enberg and Ben's dad, Jerry Stiller. The Americanised dub has been fairly popular in its own right and has re-aired several times through CBS.

Two sequels have followed: Legend of the Lost Tribe (2002) and Close Encounters of the Herd Kind (2007). In the former, Robbie discovers a tribe of lost Vikings, and in the latter, Donner is kidnapped by aliens. Clearly, neither special was Christmas-oriented.

Tropes present in Hooves of Fire:

Tropes present in Legend of the Lost Tribe:

Tropes present in Close Encounters of the Herd Kind: