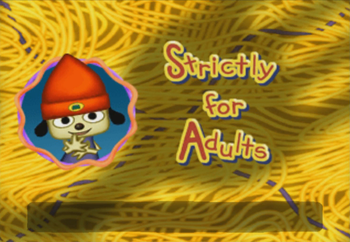 Bob, you can't watch that, we're on a PG rated show!

Even in universes of family-friendly shows, mature content exists. Sometimes it's even shown. But how can it while keeping the show family-friendly (or at least TV-14, PG-13 or T)?

Why, with Family-Friendly Mature Content! These are usually (but not always) a Show Within a Show, and bear more mature ratings than the show itself. They may also take the form of a Family-Friendly Stripper, or have a large shootout involving Family-Friendly Firearms.

This content can get away with a little more maturity than the show itself. This can be for one of three reasons. The fact that it's a Show Within a Show can reduce the overall emotional impact the content would otherwise have, the characters within can be contextualized as Anti-Role Models, or the show can cut away from the content to avoid actually showing it (one way is using a Reaction Shot). When the show itself isn't shown, just described by the characters, you have to Take Our Word for It.

May overlap with Kids Shouldn't Watch Horror Films. May also take the form of a Ultra Super Death Gore Fest Chainsawer 3000 if dealing with Fictional Video Games. If the mature show-within-show does show content more mature than the show itself, that could also be Getting Crap Past the Radar.

This can also give the in-universe censors or Moral Guardians something to complain about.

Now that that's out of the way, let's watch Alien, shall we?