Western Animation / Olive, the Other Reindeer 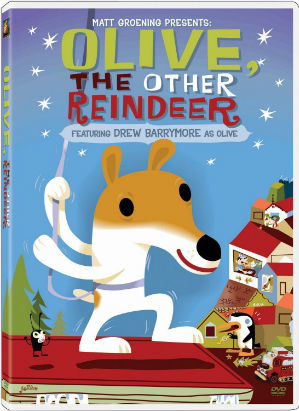 Based on the children's book of the same name by Vivian Walsh and by J. Otto Seibold, Olive, the Other Reindeer is a 45-minute animated Christmas Special from 1999, produced by Matt Groening (the creator of The Simpsons and Futurama) and Drew Barrymore, and animated by DNA Productions (of Jimmy Neutron fame). It's about a dog named Olive (voiced by Barrymore) who thinks she's a reindeer and makes a perilous journey to the North Pole to help Santa Claus fly his sleigh and save Christmas.

Along the way, she makes many friends and tries to avoid the schemes of the mean, Christmas-hating Postman. Again and again, she is told that she is not a reindeer and that there is nothing she could possibly do to save Christmas, but her never-dying spirit eventually turns them around.

The special had no sequels, but Olive did return in Walsh & Siebold's 2004 children's book Olive, My Love, which was themed around Valentine's Day and didn't feature any of the other main characters from the special. Martini (or a lookalike penguin) also starred in their 1999 children's book Penguin Dreams.

Olive The Other Reindeer provides examples of:

The Postman sings about his distaste for Christmas because of how strenuous making his deliveries gets during the holidays.

The Postman sings about his distaste for Christmas because of how strenuous making his deliveries gets during the holidays.