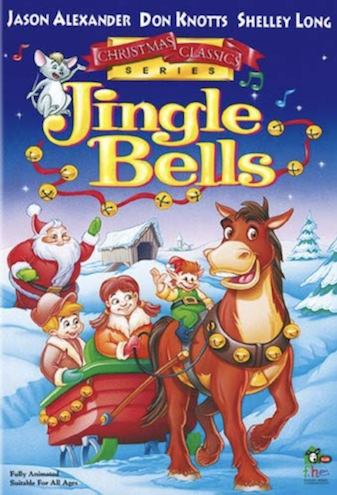 Jingle Bells is one of three, straight-to-video, Christmas musical cartoon specials released in 1999 in the Christmas Classics Series, along with We Wish You A Merry Christmas and O Christmas Tree. It is inspired by the Christmas song of the same title. Like the others, it was produced by Hyperion Pictures and distributed by Artisan Entertainment, and Family Home Entertainment for Kids. Contains an all-star voice cast that includes Jason Alexander, Don Knotts, Shelly Long, and Mae Whitman.

When a family falls on hard times, it seems that they won't be able to afford any Christmas gifts due to a tight budget. A sacrifice is made in order to make that possible. However, a magical and miraculous event changes things for the better.

Not to be confused with another Christmas cartoon special also called Jingle Bells, released in 1992 and produced by Bevanfield Films.