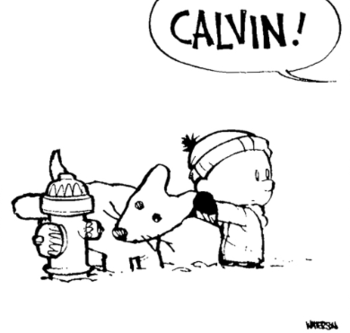 "Be careful, for the dogs have had their way with this water pump!"
—Rolf, Ed, Edd n Eddy
Advertisement:

In fiction, it seems to be assumed that dogs have a kind of fascination or obsession with fire hydrants, loving them almost as much as they love bones and chasing cats. Though not always stated outright the fact that they enjoy marking their territory on them is rarely denied, although sometimes it's treated more like normal urinating than territory marking and have dogs waiting in line to pee on them for instance. Some works take the obsession to the next level, however, without mentioning this tendency.

Can overlap with Urine Trouble. Subtrope of Canine Confusion, since dogs in real life don't particularly love fire hydrants, and even when it comes to marking territory they don't prefer them over other objects.

Poor Sam has to stop Clover (who currently has the mentality of a dog) from gaping at a fire hydrant.

Poor Sam has to stop Clover (who currently has the mentality of a dog) from gaping at a fire hydrant.