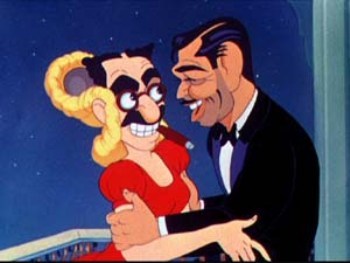 "Hollywood Steps Out" is a 1941 Merrie Melodies animated short directed by Tex Avery.

In this cartoon, Hollywood's brightest stars (at the time of the short's premiere) are at a swanky nightclub for a night of dancing and dating. Many gags and situations involving those stars ensue.

See also the 1947 Bugs Bunny short "Slick Hare", which also has celebrity caricatures and sight gags involving them, though not on this short's level (on top of that, Slick Hare actually had a more substantial plot of Elmer trying to kill Bugs so that Humphrey Bogart can have rabbit for dinner).

"Hollywood Steps Out" provides examples of: