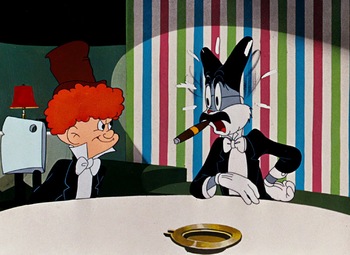 It's Harpo and Groucho, of course
Advertisement:

The cartoon starts out at the "Mocrumbo" nightclub in Los Angeles—(a parody of the Real Life Mocambo nightclub, since demolished) where a meal will cost $600 a pop and you'll find many Hollywood stars. One, Humphrey Bogart, demands fried rabbit. The waiter, Elmer Fudd, panics as the restaurant is out of rabbit. Fortunately for him Elmer finds Bugs Bunny in the vegetables in the kitchen, munching on carrots. The usual madcap antics ensue as Elmer chases Bugs, trying to make him into Humphrey Bogart's lunch.

See also the 1941 Merry Melodies short Hollywood Steps Out, which also has celebrity caricatures and sight gags, but, with the former, it's the entire point of the cartoon.