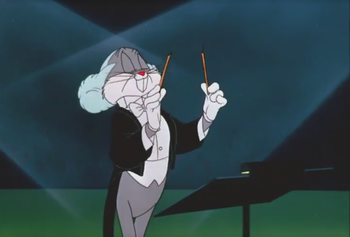 Bugs is hanging out one day playing the banjo and singing "A Rainy Night in Rio," when his singing bothers Giovanni Jones, a pompous opera singer who is rehearsing his part in The Barber of Seville. When he finds himself absentmindedly singing along to whatever Bugs is playing, Jones storms outside to put an end to the disturbance by trashing the rabbit's instruments and then tying him painfully to a tree branch by his ears. Naturally, Bugs reacts to this by declaring it's on.

That night, at Jones's performance, Bugs doles out some characteristically hilarious abuse before unleashing his finale: he enters the orchestra pit disguised as famed opera conductor Leopold Stokowski, takes over the orchestra and forces Jones to hold an ungodly long G that literally brings the house down.

Example of:
Loved by All