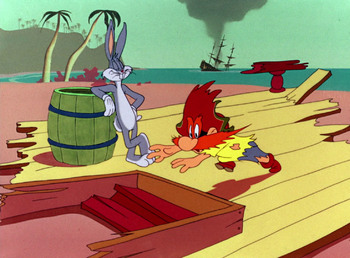 While burying his treasure, Sea-Goin' Sam ends up digging into Bugs' hole. To keep the location of his treasure secret, Sam intends to shoot Bugs (saying "Dead rabbits tell no tales"), until Bugs tricks him into almost shooting himself ("Now, just a minute, Red. Ain't you got that wrong? You mean dead men tell no tales") resulting in Sam chasing Bugs across his entire pirate ship, with Bugs getting the best of him at every turn.